Get a Sak Yant Tattoo in Chiang Mai Thailand

Get a Sak Yant Tattoo in Chiang Mai Thailand

Getting the Real Deal with Guroo Asia

Guroo Asia offers a premium package for visitors intrigued by the legendary magical properties of the Sak Yant tattoo and the unforgettable cultural experience that comes with it.

The magical Sak Yant tattoo is a cultural tradition in Thailand and highly regarded by the people who live here. While the Sak Yant has become a highly prized fashion statement, the authentic tattoo is very much regarded culturally as a sacred and treasured possession.

The Sak Yant experience delivered by Guroo Asia is the real deal. Yes you can find a tattoo artist or former monk who can replicate the Sak Yant image, but finding the traditional experience delivered in an actual temple by a practicing monk is considerably more difficult. As such, it is important for you to understand what an actual Sak Yant is and the proper protocol required in having one done. This video will help immensely.

What is a Sak Yant?

Sak Yan or Sak Yant (สักยันต์) is a form of tattooing that originated in ancient Southeast Asia. Sak means tattoo in Thai, and yant is the Thai pronunciation for the Sanskrit word yantra, meaning “magical design” or “mystical insignia” used in Dharmic religions. Today Sak Yant is practiced in Thailand and Myanmar, and to a much lesser extent, Laos and Cambodia.

Sak yant tattoos are traditionally performed by ruesi (the Thai form of rishi), wicha (magic) practitioners, and Buddhist monks using a long metal rod sharpened to a point (called a khem san). The actual tattoo consists of magical geometrical, animal and deity designs accompanied by Pali phrases that offer power, protection, fortune, charisma and other benefits for the bearer.

Yantra tattoos are believed to be magic and bestow mystical powers, protection, or good luck. There are three main effects of a yantra tattoo. One is that which benefits the wearer, such as making them more eloquent. Another is that of protection and to ward off evil and hardship. This is commonly used by military personnel, police, taxi drivers, gangsters and others in perceived dangerous professions.

Another type is one which affects people around the wearer, such as invoking fear. The tattoo only confers its powers so long as the bearer observes certain rules and taboos, such as abstaining from a certain type of food.

It is believed that the power of sacred tattoos decreases with time. So to re-empower them each year, sak yant masters celebrate with their devotees the Wai Khru ritual. Wai khru means “pay homage to one’s guru”. In Thailand, the most impressive Wai Khru is held at the temple of Wat Bang Phra.

Due to the world-wide publicity wave over Angelina Jolie’s Sak Yant tattoos, the temples and monks (who are forbidden to touch females) have stopped performing the Sak Yant ceremony on women.

To find a solution, Guroo Asia spent months and literally 1000’s of kilometres searching for a way for women to get an authentic Sak Yant tattoo right here in Chiang Mai. Much to our delight, we have discovered a Cambodian Shaman who does Magical Energy Sak Yants about 50 kilometres outside of Chiang Mai doing Khmer designs using a tattoo gun (not the metal needle).

Sak Yant’s are not always perfectly symmetrical. However, this effect is in part the essence of its beauty. As a real Sak Yant Tattoo is going to have some artistic flaws in it, remember you are getting one for the magical and spiritual properties and rough aesthetic beauty inherent with this tattoo.

Real Sak Yants are done quite quickly with a long steel needle, so the final result may not be a mathematically perfect and amazingly detailed design to show off to everyone. If this is what you are after, we recommend you visit a regular tattoo artist who will use a tattoo gun with fine needles to achieve this highly detailed, perfectly symmetrical type art. 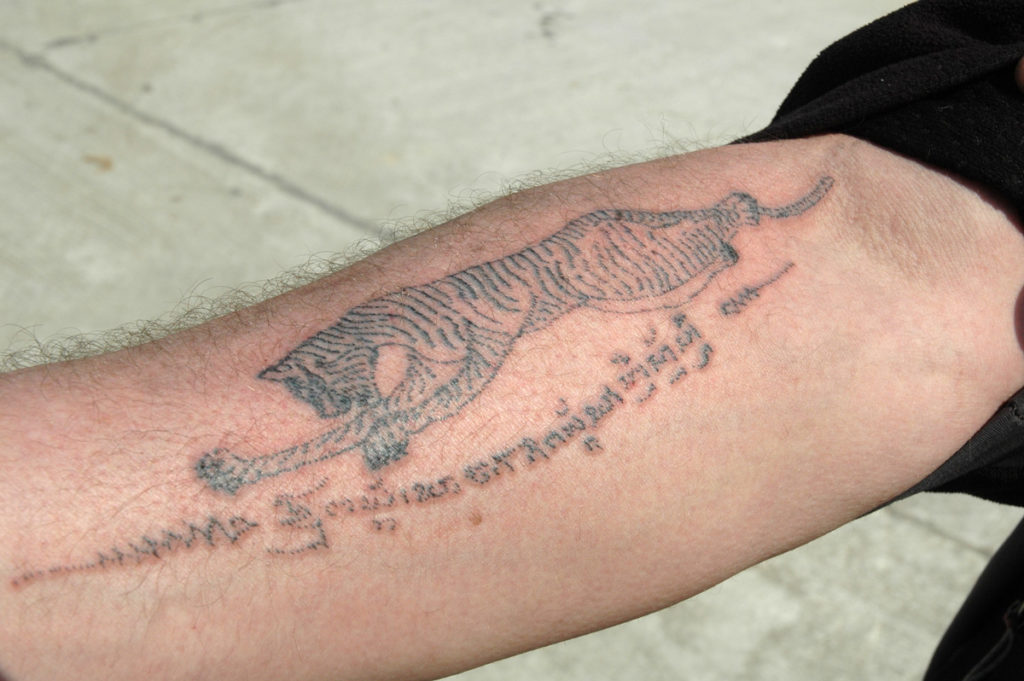 Like many Westerners, you may be worried about standards of hygiene with this tattoo. Reality is this process is done in the traditional way by a monk with a metal needle, tissue or rag, custom magical ink and several sets of hands without gloves. There is no hygiene as defined by Western standards. Yes, the needle will be disinfected before it is used, but the Sak Yant is a tradition dating back thousands of years. Being a tradition, not much has changed — including the adoption of modern hygiene standards.

If hygiene is a major concern that outweighs your desire to engage in the spiritual aspects of the Sak Yant ritual, use our Cambodian Mystic who employs modern hygiene standards with disinfected needles using his tattoo gun. 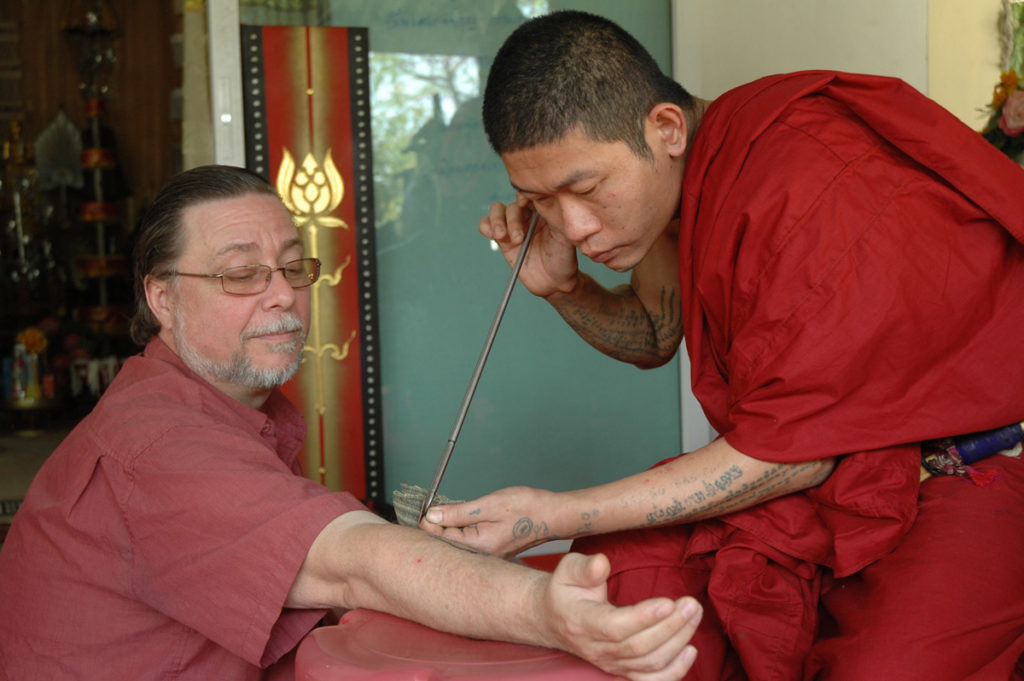 Etiquette Lessons for the Big Day

When you arrive at the temple, chances are you won’t be the only one there. This is a working temple, not a tourist attraction, with a monk who is busy serving the needs of his community.

Before stepping onto the platform, you will remove your shoes and sit on the floor along with others there to see the monk. While your Sak Yant is a special and unique experience for you, the locals you encounter here will be dealing with personal issues ranging from the serious to a simple good luck blessing. Some may have a serious demeanor while others beam their typical Thai smiles.

When your turn comes around, get like a local. Observe and adhere to the following culturally expected etiquette:

When the tattoo is complete, turn to the monk and bow 3 times to show gratitude as the receiver of this spiritual gift.

Now it’s time for the final blessing. Usually both you and the monk will hold onto your offering for a few minutes while reciting the blessing incantation. These are truly the most magical moments of the Sak Yant experience.

After the final blessing is finished you are ready to head back home to begin relishing your authentic Sak Yant tattoo and this very magical, unique experience.

Appointment Date to Be Confirmed