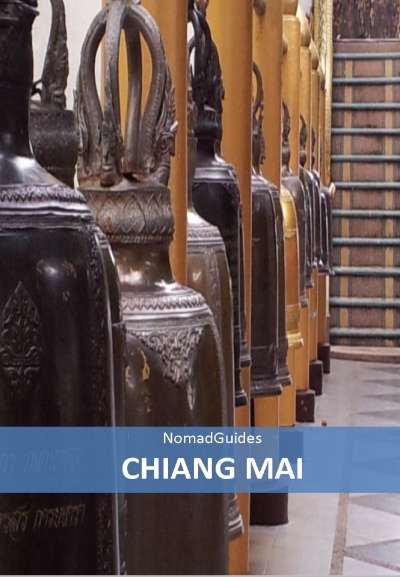 The content presented on this page is an excerpt from NomadGuides Chiang Mai (Copyright February 2016 Michael John Hughes. All Rights Reserved Worldwide) – the most comprehensive local information resource ever assembled for living in Chiang Mai. To learn more about NomadGuides and to purchase your copy of this 400 page masterwork click here

Local farmers throughout northern Thailand as well as those in neighbouring Laos and Myanmar continue to practice traditional ‘slash and burn’ typically between late February and early April each year.

Post-harvest rice and maize (corn) fields in particular are set ablaze round-the-clock in order to clear the land of plant remains and, at the same time, fertilise the soil in preparation for the replanting of crops ahead of the rainy season. Unfortunately, the resultant smoke, haze, dust and debris creates not only widespread and chronic air pollution in and around Chiang Mai but also imparts a lingering campfire-like smell and, in places, a covering layer of fine ash.

The adverse effects are accentuated by Chiang Mai’s prevailing wind patterns and physical topography (being located in a natural basin surrounded by mountains with an overlying inversion layer), and contributed to by the incineration of domestic and commercial waste as well as by forest fires started either deliberately to encourage the growth of the highly prized wild ‘hed thob’ mushroom or to clear the land for cultivation, or secondarily, through fires triggered by wind-borne smouldering embers.

Seasonal crop burning has long been a perennial and emotionally charged issue in Chiang Mai. Although the scale, intensity and duration of the phenomenon vary somewhat from year to year, at best the effects are unpleasant and at worst, positively dangerous. Indeed the ambient Air Quality Index (AQI)—as measured primarily by the quantity of respirable particulate matter between 2.5 and 10 micrometres/microns in diameter (designated as ‘PM10’) per cubic metre of air—in Chiang Mai is so poor on some days that it far exceeds the level considered safe to breathe in.

While the Thai government deems a PM10 value of 120μg/m3 or less as having no detrimental health implications, the United Nation’s World Health Organisation (WHO) advocates ambient (outdoor) PM10 levels in any 24 hour period should be no more than 50μg/m3. In 2015, for example, between the 9th March and 22nd March inclusive, Thailand’s Pollution Control Department (PCD) reported the daily average PM10 ranged from 100μg/m3 to 292μg/m3 at Chiang Mai City Hall and from 117μg/m3 to 299μg/m3 at Chiang Mai’s second air quality monitoring station at Yupparaj Wittayalai School (in the ‘Old City’).

Besides the tens of thousands of individuals treated for respiratory-related conditions at this time of year, the dense smog that often shrouds the city severely reduces the visibility (down to as little as 200m) often blocking out the sun, obscuring views of nearby Doi Suthep mountain (shown below before and during the crop burning season), now and again preventing inbound flights from landing at Chiang Mai Airport and, at times, bestowing an almost post-apocalyptic feel to the city.

Reactionary initiatives by local authorities to combat the smog involve the implementation of fire bans (and the attendant imposition of hefty financial penalties on those caught in violation), extinguishment of forest fires, distribution of face masks as well as the deployment of aircraft over Chiang Mai with the purpose of seeding clouds in order to artificially induce rain or to disperse large quantities of water into the air in an effort to dampen the smoke.

Though well meaning, said measures are generally ineffective and afford no sustainable, long-term solution. Combined with high daytime temperatures and a distinct scarcity of rainfall between the end of February and the beginning of April, there is sadly little respite from the pollution and smog borne of the crop burning season. Quite understandably at this time of year, there’s an exodus of foreigners and locals who flee Chiang Mai heading especially to the south of Thailand seeking clearer skies, cleaner air and cooler temperatures.

The only other option of course is to sit out the ‘smoky season’ and there are many strategies that can be adopted to mitigate the risks to your health and generally make your life more bearable for the duration:

The cheap surgical style cloth masks so often worn by Thais should be avoided (as should simply covering your nose and mouth with a bandana/kerchief or similar article) since they’re all but ineffective as a barrier against the harmful particles carried in the air. Instead, opt for a facemask/respirator which is certified to screen against the smallest and most damaging airborne impurities, and, ideally, one with a layer of activated charcoal to additionally absorb the smell of smoke; the efficiency rating of the filter attached to such facemasks/respirators is defined by a couple of major standards:

Although a number of different brands of facemask/respirator are represented locally, by far the most popular for everyday use during Chiang Mai’s crop burning season are the sundry disposable 3M particulate respirators, in particular the N95- and P2- graded models; available throughout the city at some local ‘mom and pop’ stores as well as from hypermarkets, Makro, DIY superstores (such as ‘HomePro’ and ‘baan&BEYOND’), the 3M distributor (Delta Electric) on Wua Lai Road and even some pharmacies from around 120 baht upwards.

It’s important to know that such facemasks/respirators are designed for use by an adult in good health (since, when worn, relatively more effort is required to breathe) and that they should be comfortable to wear but very close-fitting to ensure entry of unfiltered air is duly minimised.

All that said, asthmatics and those sensitive, allergic or otherwise greatly susceptible to airborne contaminants should certainly think twice about being in Chiang Mai between approximately the last week of February and the first week of April.

The other major source of atmospheric pollutants in Chiang Mai but posing a health risk year-round is exhaust emissions belched out by poorly maintained and unregulated diesel engines, most notably those of songthaew and tuk tuk. Foul- smelling and highly toxic, discharges are more noticeable (either as a pedestrian or in a vehicle open to the elements) during rush hours and in stationary traffic, and magnified in hot, dry weather.

Although the volume of traffic in Chiang Mai—even during peak hours and along major highways—isn’t in the same league as that of Bangkok, it’s nevertheless sensible to take one or more of the precautions outlined above to guard against breathing in lungs-full of noxious waste exhaust gases when outdoors.