It has been estimated that by 2035, there may be as many as 1 billion Digital Nomads globally. At present, Chiang Mai, Thailand has emerged as the largest concentration of Digital Nomads in the world. 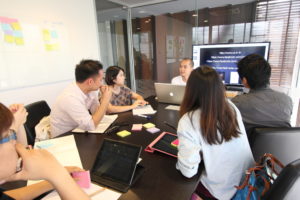 It has been estimated that by 2035, there may be as many as 1 billion Digital Nomads globally. At present, Chiang Mai, Thailand has emerged as the largest concentration of Digital Nomads in the world.

Digital Nomads are individuals who use telecommunications technologies to earn a living and often live in a nomadic manner, traveling as they work from locations around the globe coffee shops, public libraries, and co-work spaces to accomplish tasks and goals that traditionally took place in a single, stationary workplace. Generally, they fall under three basic categories: employees working remotely for a company, freelancers who exploit the ‘gig economy’ by taking on temporary or part-time projects (often through project-based platforms like Upwork or Fiverr) and entrepreneurs who are establishing their own businesses, often with remote work-teams or sub-contracted parties, repeat clients and/or passive income models based on things like affiliate marketing.

It has been estimated by Peter Levels of NomadList that there will be as many as 1 billion Digital Nomads by the year 2035. There are a number of emerging trends contributing to this growth including: a decreased necessity for location-dependent, tech-based workers; faster, cheaper internet; and faster, cheaper air travel. Beyond this, a very basic level of tech savviness allows people today to see very quickly how a life spent slogging up the corporate ladder with a 30-year mortgage in suburbia – all in the hopes of enjoying a few twilight years in a beachside retirement condo – can be traded up for a higher quality of life, perhaps in an ‘exotic’ locale, as your own boss, for a fraction of the price.

The role of Guroo Asia in the midst of the Digital Nomad movement is two-fold. First, we attempt to provide quality services that address real issues and concerns of Digital Nomads, from visas and airport pick-ups to securing longer-term group accommodations in Nomad Houses. Beyond this array of services, however, Guroo Asia is also playing a central role in the establishment of Chiang Mai as a sustainable Digital Nomad Hub. To this end, we have supported the first Nomad Social Responsibility dialogues in the city and we are working to develop partnerships with Chiang Mai University and select government offices that will focus on the best policies and practices for both accommodating Digital Nomads and facilitating a deeper engagement between nomads and locals.

IS IT LEGAL TO BE A DIGITAL NOMAD ?

This article has created an echo chamber of misinformation. It was based on a statement made by an organization which a) has nothing to do with immigration, and b) was a misinterpretation of what was said. It is, however, referenced frequently by the Digital Nomad community whenever the legality of working online in Thailand is called into question.

Worthy of note is that this open co-working space is full of people who are not working together for a business in Thailand on a tourist visa. They’re doing everything from writing code to surfing Facebook or checking email. It’s not an office.

THE ARREST OF FOREIGN WORKERS (NOT DIGITAL NOMADS)

This story runs a little differently. Can you spot the differences from the PunSpace raid?

Leading up to a number of arrests which rattled a few chains in the Digital Nomad community, a job listing appeared on the Job Chiang Mai Facebook page on January 17, 2015 by a local company called BOI 360 Max Co seeking a Thai national to serve as an accountant.

With just under 20 employees who were all foreigners on tourist visas, the company operated out of a makeshift office on the ground floor of the Riverside Condo on Chiang Mai-Lamphun Road and was run by a Canadian national.

The company was not registered and therefore not legally operating in Thailand, which led to the arrest of 17 foreign English teachers.

Here’s why this occurrence varies from the raid on PunSpace and is not a clear indicator of the local government’s stance on Digital Nomads:

The only thing in common with the PunSpace story is another strange anonymous tip. In this case, authorities were alerted to a group of foreigners who might have been tutoring Chinese spies and both Thailand’s Security Affairs Section and Chiang Mai’s Chinese Consulate were notified. You can read more about these arrests in the Bangkok Post.

WHAT ISN’T A DIGITAL NOMAD?

Some definition of what a Digital Nomad may be is required going forward, as in —we are not people who go around setting up illegal businesses on tourist visas. There’s a fine line, and it only takes one ignorant person to set off a political drama.