Driving a motorbike in Chiang Mai, Thailand is like a cross between a Star Wars video game and Death Race 2000. 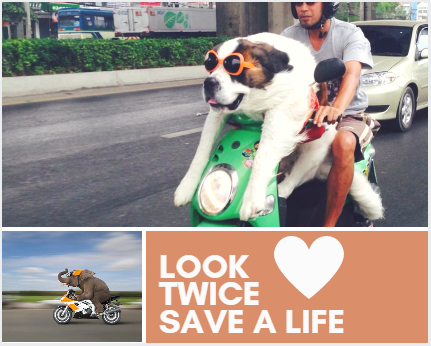 Driving a motorbike in Chiang Mai, Thailand is like a cross between a Star Wars video game and Death Race 2000. From endless, winding mountain roads to the wide open plains, and from the controlled mayhem of rush hour traffic to the ever-twisting labyrinth of the Old City, Chiang Mai is an incredibly exciting place to explore by motorbike.

On the plus side, being a motorbike culture, you won’t find a speck of broken glass anywhere on the streets of Chiang Mai, and strangely enough, the only time you’ll hear anyone honk is when they are genuinely concerned about ending your life (or simply visiting from Bangkok).

Reality is, though, when one becomes a student of the mayhem, there is a totally predictable order to the ebbs and flows of navigating and surviving the daily traffic hustle in Chiang Mai City.

Who knows at what age they’re first tossed the keys, but Thailand is where you’ll see dads quadruple-riding the wife and kids around chatting on cells while they dodge potholes. It’s also not unusual to see labourers transporting 20 foot long poles on their shoulders and 14-year-old school girls triple-riding friends to school. Simply amazing talent.

This being said, driving one-handed, texting or talking on cells while driving, taking little shortcuts against traffic on the side of the road, or speeding like a bat out of hell simply invites trouble – even for the very best of the best.

There are two distinct categories of accidents. “Single vehicle” where you take yourself out (10%) and “multiple vehicle” where other drivers take you out (90%). It’s only when you drive around other vehicles that the real problems begin.

Since other drivers cause 99% of the problems, the best place to learn how to drive is on a dirt bike far away from the danger of cars. It’s here where you learn the most basic of skills like standing when you drive over obstacles and how to slide comfortably around corners at speed.

Bikes are actually quite stable machines since the wheels act as gyroscopes that force you upright (why Evel Knievel doesn’t fly sideways). The faster you go, the more stable you become. Motorbikes are also nimble. With high power-to-weight ratios, bikes are able to quickly accelerate out of danger and stop twice as fast as the average car. This is why emergency braking comes with an additional danger of being run over from behind.

Your big reality check is understanding that ANY wipe-out is a potentially life-ending or permanent physical maiming situation. When driving a motorbike, the only real sight-seeing you can afford is scanning, scanning, scanning the road surface for obstacles and knowing the location of every vehicle around you at all times. Momentary lapses of attention are best served by big cars and seat belts.